The Matt Smith Review: Part 12 - The Impossible Astronaut/Day of The Moon

- July 30, 2012
What We First Thought: Arghhhhhhhhhh! What's going on? Doctor Who is going to get cancelled because people don't understand! Arghhhhhhhhhh! 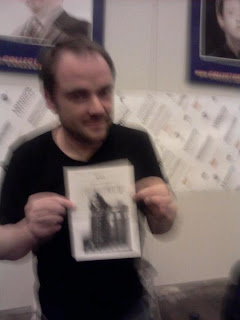 BOOM! Doctor Who is back and starts with The Doctor hiding under the skirt of a pretty lady artist (to be honest, I think only Matt’s Doctor would be able to pull this off so innocently!)  The other little scenes are like ‘little adventures’ and we’re only seeing a glimpse of them, much like when we hear about The Doctor and River’s adventures with ‘Jim The Fish’, much later on!  I think this is a brilliant way of introducing us to what’s going on, as we’re likely to be wondering what is going on, when the story reaches its half-way point!

It’s clear that some time has passed since A Christmas Carol, as Amy and Rory are now living together and The Doctor is elsewhere, having these adventures to attract their attention, for some reason.  Although I reckon he just did it for the sake of it – he just needs to turn up at their front door to attract their attention!  Turns out they’ve got an invite to attend a picnic with The Doctor – in America!  River also turns up and they’re having a nice time until a random person in a spacesuit turns up in the lake and shoots The Doctor!  Eh?  Did I miss something? Well, no, as that’s exactly what’s just happened!  Of course if you read Doctor Who Magazine you would have already been spoiled!

When I hear comments about this story they’re always formed around a variation of ‘it’s confusing’ what’s confusing about it?  It’s the FIRST PART of a 2-part story and a much-wider series.  Can you imagine people these days having to put up with the serial format that the classic series used to be in?  If you think The Impossible Astronaut is confusing, then watch the first 2 parts of Inferno or something!

The decision to use the American backdrops paid off in some style, as the scenery is absolutely beautiful.  But with the vast majority of the story actually filmed in Cardiff, some credit must go to them too as the sets looked just as good (though according to some American friends, the décor of the Oval Office wasn’t correct. Call it revenge for inventing the U-571! 1-1) The casting was pretty top notch, with Mark Sheppard (Fish Custard Fanzine reader and Brit – 2-1) playing the very-likeable Canton Everett Delaware III, being the highlight.

Watching this again has drawn me to how dark the story is.  The Silent killing Joy in the bathroom (though we call it a toilet, as there isn’t a bath in there. 3-1) was pure evil.  Then its reply to Amy (“Why did you kill her?”) “Joy…her name was Joy” was very chilling, and any children watching must have been a little edgy by this point.  What about the fact that they were uglier than the Royal Family (3-2) and the way their face twisted…eurgh!  And lets not forget the fact that you can’t remember them when you don’t look at them! This is exactly what we want in Doctor Who – monsters that are scary in EVERY aspect!  And I’ve not even mentioned how creepy a group of them looks! The Silence reminded me of the Weeping Angels.  They had both had the advantage of perception.  They both were very patient.  And perhaps, both of them can live in an image (when The Doctor shows Canton the hologram he made from Amy’s phone)

I really enjoyed how the start of Day of Moon puts us on the wrong foot right from the start.  That way, we need to concentrate that little bit more on the story in hand and that’s how it pulls you in.  The backdrop of the moon landing (if it actually happened - 3-3) worked well, but I thought The Doctor’s explanation of ‘The Silence need a spacesuit, so encouraged the humans to go to the moon’ was a bit cheesy, didn’t spacesuits already exist by then? And surely, with their technology, they could have made one anyway!  We've taken the Adric out of The Silence in the fanzine for being so easily-defeated, but they are genuinely creepy (I really enoyed on the 'You will shoot us all on sight' comment was delivered) and that's a good platform to work from for the future, in order to establish them as classic Doctor Who monsters.

Overall, I think this two-parter is better judged as the start of a story being laid down.  As the series moves on, it WILL make sense and we’ll look back and appreciate this more.

Let’s call it a draw.

What We Think Now: A good start to the story of a series that has yet to play out...

If you would like to contribute a 5-word review for The Curse of The Black Spot Astronaut/Day of The Moon  please @ us on Twitter, using the hashtag #rubbishbeards, or post on our Facebook Page!
alex kingston arthur darvil bbc bbc america doctor who dr who karen gillan mark sheppard matt smith steven moffat the silence uk usa