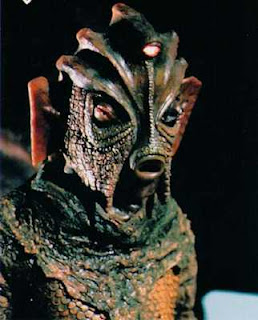 What We First Thought: That was nice. Now for the washing up!

You know when you get into the middle of a book, where the pictures are?  Then you get past them and the second half doesn’t quite match up to your visions of the pictures, which in turn affects your thoughts as you continue to embark on the second half of the book? That’s exactly how I feel about The Hungry Earth/Cold Blood.  It’s a story that had all the makings of a classic, but part 2 just petered out into boredom, save for the ending.

The biggest disappointment of this story for me is the look of the Silurians, or Homo Reptilia, whatever you want to call them.  They just look too human. I can appreciate the ‘Homo’ bit indicating that they’re between the two (which is wrong, as they’re supposed to be fully reptile!) but still, they just look like a human that has been painted green!  Would it have been too difficult to update the classic look of the Silurians, with the third eye and everything?  There are so many differences between classic and new, that you could be forgiven in thinking that the Homo Reptilia are another branch of the Human Race, rather than the Silurians.  I found it amusing that they called the Humans ‘Apes’.  Look in the mirror!

It all starts off pretty promising though, the great scenery blends in well and the story moves on at a decent pace, with the aid of some decent direction by Ashley Way.  But just as it starts to build up nicely, part 2 achieves the opposite.  I think describing it as a ‘mess’ is a bit unfair, but it certainly dilutes what was a decent first episode.  Cold Blood is just so clunky - the story moves very slowly, doesn’t make any real sense (why couldn’t the Homo Reptilia build better protection for their oxygen pockets?)  It’s nothing that couldn’t have been fixed with a line of dialogue, there was plenty room for it as this story was padded out more than a training bra.

Despite the shortcomings, there were some decent lines and performances.  Neve McIntosh did very well to play two roles - though the characters were very similar, she still managed to make me believe that they were different characters (which sometimes doesn’t always happen!)  I also enjoyed the performance of Meera Syal as the very likeable Nasreen Chaudhry and I was actually sad when Malohkeh was gunned down!  He seemed to be a very interesting character and I enjoyed his rapport with The Doctor, nearly as much as Nasreen’s!

Ambrose was a very intriguing character to me - very unlikeable, but yet you can’t really blame her for wanting to protect her family.  The line of ‘you are weak’ was well delivered by Alaya and probably pushed Ambrose over the edge.  It’s little things like this that make an episode, as a lot of thought is put into it.  This is why I don’t understand why the script ignored moral issues like the stolen bodies, which were taken from the graves.  It’s clear that they were taken for research by the Homo Reptilia, but surely that would play on peoples minds a bit, seeing bodies of local people, even loved ones, stolen?  The fact that it wasn't addressed when they went down to the settlements, was a very disappointing oversight.

Though a decent line (pass it on as legend/religion – like many stories are), The Doctor’s advice to the kid to actually pass it on, was a bit mental – who the hell would believe him?  Having Nasreen and Amy discuss terms with the Homo Reptilia was also a bit odd – who would listen to them?  And how will they explain the explosion of a drill and the disappearance of the people in charge?  I’m not one to bang on about poor effects, but that explosion was done very poorly.  Perhaps Ashley Way should have kept in the long-distance shot, which looked a lot better, instead of including the close up?

The ending is still a little shocking, but I was left to wonder what if Rory hadn’t have been ‘killed’ in the previous episode?  Surely this scene would have had more of an impact?  I realise that having Rory gunned down by the bad breath of OAP, played a role in Amy finally making her ‘choice’, but having him dying again a week later just takes the shine away.

And I think ‘taking the shine away’ best sums up this story! For me, this was just a disappointing rehash of Doctor Who and The Silurians, but without the very interesting soundtrack!

What We Think Now: Yet another missed opportunity with a classic monster.


If you would like to contribute a 5-word review for Vincent and The Doctor please @ us on Twitter, using the hashtag #spaceturkey, or post on our Facebook Page!
chris chibnall doctor who dr who homo reptilia karen gillan matt smith sci-fi silurians uk