The Scarifyers - The Horror of Loch Ness - Review 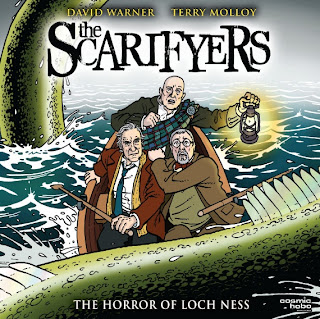 We’ve had some interest from our readers for our past reviews of The Scarifyers, so when the latest release landed on our doormat, we couldn’t resist in letting you know how we found The Horror of Loch Ness.  The story sees Harry and Dunning investigating a mysterious disappearance in the Scottish Highlands, where Malcolm Campbell, real-life land and sea speed record breaker, goes missing whilst testing on Loch Ness.  But who’s to blame? Shifty American spies or something stirring in the deep waters of the Loch?

The Loch Ness Monster myth is a premise that has been over-done by television and film in the past, but the Scarifyers team manage to pitch it just right.  They find the right balance of comedy, horror and (probably most importantly!) pacing of the story to keep the listener interested.  As always, Terry Molloy is on top form as Dunning and David Warner already sounds at home in only his second outing as the co-lead.

One thing I really do like about the series is that it likes to use real-life events and interweave them with the downright weirdness that goes on in the story!  Real-life Occultist, Aleister Crowley (played by David Benson) returns for this adventure and plays quite a pivotal role in the story.  One scene sees him messing about in a dining room (naked) because he thinks he is invisible.  Apparently, that actually happened in real life!  (Apart from naked bit. Maybe!)  One thing I love about Doctor Who is its historical content and how one of its stories can interest you in a particular time or public figure.  The Scarifyers plays a similar role with its stories, listening to it really does transport you to the 1930’s and interests you in the goings-on in that time period.  But the most enjoyment I take from it, are the characters.  From Benson’s whacky (but true) portrayals to a few old Army Officers relaxing at their club, passing humorous accounts of war that they were hardly involved in!

Beautifully written, jokes and references aplenty as well as an excellent performance from the late Philip Madoc, makes this a must listen for any Doctor Who fan. Needless to say, we won’t be spoiling it more than we already have, but if you’ve been gripped by the likes of Brain of Moribus and The Wicker Man (not Loch Ness with Ted Danson – that was rubbish!) then this will have a similar affect.  The Scarifyers ‘Horror of Loch Ness’ is out on CD and Download now.

It’s shaping up to be a big year for Cosmic Hobo, what with more releases planned, more radio airtime AND the release of a comic book chronicling the adventures of Lionheart and Dunning.  Be sure to check out http://www.cosmichobo.com for more information - and please support this excellent series!