- July 16, 2012
What We First Thought: Is that really James Corden playing that likeable bloke? 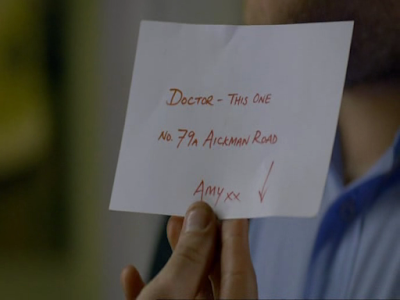 I sometimes feel a bit sorry for James Corden. By rights, he should be feeling sorry for me, what with his huge bank account, job offers and endless celebrity friends.  But there seemed to be a collective groan when he was cast in Doctor Who - for some reason, James Corden the man, comes across as a figure of fun to some people (not for his size may I add, but more for his personality).  His infamous ‘spat’ with Patrick Stewart at an awards ceremony is a good example (as is 80% of his acting output).  For me his horrible World Cup show, a very poor imitation of Baddiel and Skinner’s Fantasy Football, where he would gather all his celeb ‘buddies’ in a studio and have a chat, coupled with awful humour and a lack of knowledge about the game, was the final straw for me. I wasn’t going to hear a good word said for him.

But why do people feel this way about him? Maybe it’s just the fact that he isn’t as funny as he thinks he is?  Maybe because he’s just evocative of the times, where you need a gimmick or behave in a certain way to be successful?  It seems all of his ‘jokes’ are about his size, or him being thick or gullible.  It isn’t much of a departure for him, so it gets very tired after a while.  It’s a shame because he’s actually a very good actor when he’s got a decent script, as shown in this episode.  I remember watching him in the series ‘Fat Friends’ where he played a bullied schoolboy and he was excellent.  I realise to anyone that isn’t from the UK, or those who don’t give a shit, all this Corden-baiting is meaningless.  So I’ll finish by saying; please James, stick to comedy-drama, rather than all-out comedy!

Away from Corden, I very much enjoyed The Lodger.  Thankfully it was Matt that was doing most of the ‘humour’ in this episode, so that probably helped!  The way in which he holds himself and delivers lines like ‘Have some rent’ just makes me laugh.  He just plays that ‘fish out of water’ (that The Doctor should be) so well. He’s pure alien.  The ‘greetings’ he does makes me laugh every time and I just enjoy seeing the awkward reactions from people!  He wouldn’t get in my football team though - I’ve got no time for anyone who doesn’t pass!

The actual story seems to be one of the more run-of-the-mill efforts.  Although having a drunk woman being lured upstairs is a practice that I’ve seen many a time and couldn’t help but smile.  Although, to some people, it could have been seen as something a bit more sinister. To the kids watching though – the ‘monster was getting her’. So it was a scene that worked on all levels!  With the story being padded out with The Doctor’s attempts at trying to fit in, the simple explanation of the time ship ‘trying to find a pilot’ worked well and I was thankful, for once, that a ‘monster’ wasn’t required.  Not everything in Doctor Who needs to have a long-winded explanation, behind some costumed alien menace.

It’s interesting to note that this episode, written by Gareth Roberts, was based on a DWM 10th Doctor comic strip of the same name, written by Gareth Roberts.  In the comic, The Doctor stayed with Mickey, whereas the TV version is completely different, in the sense that The Doctor is living with people totally alien to him.  I think that this episode wouldn’t have worked with Tennant’s Doctor – he’s just too human.  You never really got the feeling that his Doctor was an alien and that’s the biggest criticism of his tenure (it wasn’t his fault that some of his scripts were poor!) But it just shows the quality of Matt Smith, that he's able to come across as somebody weird, good weird as Craig says!

I was also impressed at how the support cast seemed to have a decent rapport with each other – it seemed like we had stumbled into their life, another TV show if you will.  The domestic set-up that Craig had was very well realised and I sort-of wanted to see more. Though I’m not advocating a spin-off series!  The 'love triangle' could have come off really badly, but I thought it worked well and you could sort-of sympathise with Craig being upset at The Doctor, who was basically stealing his life.

Does love save the day, as many fans have been moaning about? Well, no. If you actually watch the episode, The Doctor clearly explains that the ship won’t work if the humans touched the control and used their thoughts about staying put, as the ship worked on their mentalities.  It’s science-fiction, not fantasy!

The best way to sum up The Lodger is just by saying that it’s a ‘bit of fluff’ - a episode that everyone can enjoy, it won’t go down as one of the classics, it’s just another decent watch.

Even James Corden was alright.

What We Think Now: It bloody was you know!