Showing posts from December, 2011
Show All

We Are Da Doctor Who Management (Taken From Issue 8)

Now we all think we can write a series of Doctor Who.   But what would happen if the bigwigs down in Cardiff actually listened to us fans?   We’ve enlisted the help of those people who used to do surveys for Family Fortunes and they’ve been everywhere on the worldwide web (as well as in some ‘dirty and seedy establishments’ – McDonalds) and asked fans what they would like to see in their dream series’.   Here are the findings: Episode 1 – The Return of John Smith Written By Steven Moffat Another tedious episode in which The Doctor has got to use the name ‘John Smith’ at least 617 times in a 45-minute episode, just to give a ‘nod’ to the Classic Series.   Which is strange, as The Doctor didn’t actually use the name John Smith all that much in the Classic Series anyway. Episode 2 – The Rani Returns Written By Russell T. Davies The Rani (still played by Kate O’Mara) crash lands on Earth in the 21 st Century, after she was shot down by Sgt. Benton, who has
Post a Comment
Read more 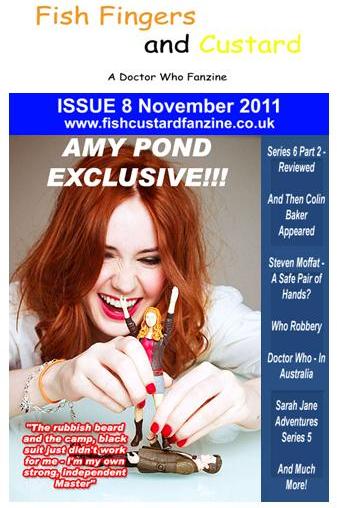 The final Issue of 2011 - and if the death threats I've been receiving are to be believed - it is the last Issue EVER! (So we've pulled out all the stops!) In This Issue Series 6 (Part 2) Reviews Convention reports from London and Sydney! It's Been A Wonderful Adventure - Was The Sarah Jane Adventures a success? The Other Season 12 - What would it be like if Jon Pertwee had have stayed on? Dress Karen Gillan - YOUR chance to finger her knick-knacks And Much More (honest) You can download this issue by clicking here If you would like contribute to future issues, please get in touch via e-mail at fishcustardfanzine@googlemail.com We're also having a (online) Christmas Party on the 21st. If you fancy joining in, check out our event page . Bring beer. Cheers!
2 comments
Read more

- December 11, 2011
It's an aspect of Doctor Who that has always fascinated me.  Missing episodes. 106 still remain missing, as the BBC made the short-sighted decision to wipe their video tapes.  Many were recovered by overseas broadcasters and fans, but as the world grows smaller, finding them all, or just even a few, seemed like a massive uphill task.  Like walking up Everest in just your socks. Today however, the BBC have exclusively revealed that episode 3 of 1965 serial ' Galaxy 4 ' and episode 2 of 1967's ' The Underwater Menace ' were recovered by a private collector in 1980's, and only came to light a few months ago.  It's fantastic news for Doctor Who fans everywhere, as apart from getting those episodes back - it also gives us fresh hope that more will be recovered.  How many other collectors are sitting on unlabelled film cans?  How many Television stations around the world have got film cans that haven't been checked?  There's still the long-standing
Post a Comment
Read more 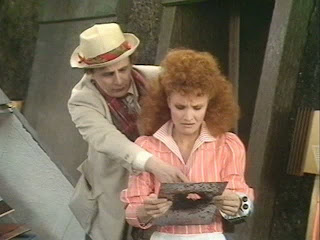 We're delighted to announce the details of this years get together - on the Internet.  Bring beer. Join some like-minded souls for a live watching of the classic Doctor Who adventure Time and The Rani. The legendary story will form the basis of the 2011 Fish Custard Christmas Party on Wednesday 21st December. All you’ll need is alcohol, internet access and to have n o taste whatsoever. You don’t even need to wear clothes or talk to anybody. It’ll just be like a school disco. If you don't have access to the best Doctor Who episode ever, you can whack on any old episode you want and join us for a Doctor Who geek-out. Stay tuned to our various sites for details and the hashtag #welovetherani on Twitter You can find the event page, on Facebook, here   (or you can just come and say hello and join in some of the games we'll be playing!) In other news, we'd like you to take a look at another Facebook page Support Your Local Doctor Who Convention .  Basi
Post a Comment
Read more
More posts