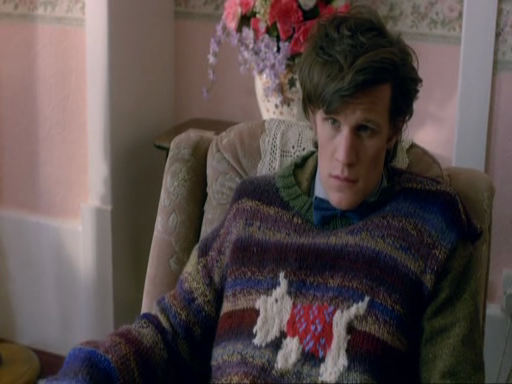 What We First Thought: Ponytails are cool. Not.

Like most people, when I first watched this, I thought it was a little bizarre.  A decent episode, but it’s one of those that you’ll need to watch again to pick up more from.  As mentioned during these reviews, I don’t believe you need to watch the episodes over-and-over again to understand them, but it’ll help you to take more from the series if you go back and watch them.  Amy’s Choice is very much an episode of that ilk, as there are lots of little bits in there that play around with the characters and the storyline of the series.

Amy’s Choice sees the introduction of ‘The Dream Lord’ (played by Toby Jones) who we find out is ‘The Doctor’s dark thoughts’.  Anybody can be forgiven in thinking that this is a reference to The Valeyard, who was the physical body of all The Doctor’s dark thoughts.  Created ‘between his 12 and final regeneration’ The Scrapyard put the Doctor on trial, in order to utterly destroy him, though surely that would rule out The Boneyard’s existence?  It was a plot that was made at a very confusing time in Doctor Who history, so it’s best not to think about it.  Needless to say, The Dream Lord is realised much, much better and this story actually makes sense!

I’ve touched on how Journey’s End introduced the self-loathing aspect of The Doctor that was very rarely seen afterwards.  Here we have an ‘Intergalactic Wag’ that just goes wherever he pleases, picks up who he wants and does whatever he likes.  Things like that have consequences and I don’t believe that Doctor Who takes advantage of that goldmine of potential material.  This episode though, may have started us on that path, as The Doctor is quite clearly affected by his dark thoughts.  Some of the best lines from this, come from The Dream Lord, but it’s The Doctor who sums it all up for us ‘There’s only one person who hates me as much as you’.  I think we all knew who that was.  (No, it wasn’t David Tennant!)

After watching this, I was left asking myself whether this episode acted as a device to acknowledge The Valeyard, but yet shove him to one side.  I really enjoyed how The Dream Lord got the The Doctor to squirm and made him feel guilty and ashamed.  We’ve never really seen that before.  Maybe The Knackers Yard is what The Doctor will become if he continues on the same path that he’s been walking down?  Maybe he’ll be able to avoid that fate now? Maybe this is the start of a Dark Doctor? Or maybe it could just be a coincidence and I’m reading far too much into it!  Whichever it is, it’s fascinating to think about and gives another area for the show to move into, if it ever needs it.

It wasn’t just The Doctor who was emotionally turned inside-out during this episode - so was Amy.  That’s why it’s called Amy Choice, presumably! Her ‘choice’ was designed to allow her to finally ‘get over’ The Doctor, as her true love for Rory was clinched when he was gunned down (by the gas of) an old lady!  Her quote of ‘If this is the real world, and Rory’s not in it, then I don’t want it’ was well delivered and finally gave the character of Amy some dimension.  The scene where Rory is attacked and he’s slowly melting away, represents all the hopes that he and Amy had built up during this dream.   This was also an opportunity for the character of Rory develop more.  His insistence that the family life they had was ‘real’ just shows how desperate he is to have a life like this.  And then there’s Amy, aboard that freezing TARDIS who says that this is the real world, which says to me that she’d rather travel in the TARDIS than settle down.  As it turned out, both of them were dreams.  Which considering this series is very much fairytale-esq, is very apt.

I can’t go without mentioning some of the scenes I laughed at – The Dream Lord’s costumes changes, The Doctor wearing a jumper with a dog on it (I would have made him wear it for a good chunk of the episode) and of course, hitting elderly people.  I know in the real world, it’s a terrible crime, but there’s just something funny about seeing Rory hit an old woman!  (Of course, she wasn’t really an old woman – she was an alien. Played by a stunt double. In a wig!)

Amy’s Choice is very much an enjoyable episode for all Doctor Who fans.  I wouldn’t show this to anyone who wasn’t used to the series though. It’s a bit weird!

What We Think Now: Get them dog jumpers in the shops!

If you would like to contribute a 5-word review for The Hungry Earth/Cold Blood please @ us on Twitter, using the hashtag #watchthattongue, or post on our Facebook Page!
arthur darvil bbc doctor who dr who dream lord karen gillan matt smith sci-fi simon nye toby jones uk