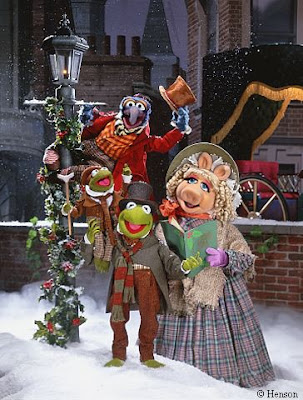 What We First Thought: That was ok.  Going to switch over now, before Eastenders comes on. I don’t want to be depressed at Christmas.

I feared the worst when I heard that Steven Moffat was using a story written by a former Doctor Who star as ‘inspiration’.  Charles Dickens’ A Christmas Carol is re-imagined on stage, TV and film every single year, so there must be something in it that makes it appealing to generations of audiences.  But this is Doctor Who and when Doctor Who tries to ‘do’ popular culture, it can sometimes fall into farce.  Thankfully the episode, shockingly called ‘A Christmas Carol’, is pretty decent as it’s The Doctor that uses Dickens’ story as inspiration, not Moffat completely ripping it off!

Set on a planet whose skies are controlled by the Scrooge-like figure of Kazran Sardick (played by Michael Gambon), The Doctor appears and appeals for him to clear the clouds to let a crashing spaceship land safely.  It so happens that Amy and Rory are ‘busy’ on that spaceship, so it’s up to The Doctor to try and persuade Kazran.  But as we’ve already established, Kazran isn’t a very nice chap and apart from dabbling in the loan shark business, where he takes people as insurance, he just isn’t arsed about those people on the spaceship.  Although I reckon that The Doctor could have found a way of rescuing those people anyway, he does his Dickens bit and travels back to try and ‘change’ Kazran’s way of thinking. Which doesn’t work out too well…

On the whole, I really enjoyed watching this episode again. I found it interesting that Kazran was above everything and it was he told the authorities on the planet what to do.  It’s very much in the vein of big companies and corporations these days, who get their own way because they have something that is needed by governments.  Scrooge was like this to a lesser extent, as he knew that his workers wouldn’t dare speak against him (not to his face, anyway) and the people he loaned money to were terrified of what will happen if they didn’t pay up.  I didn’t think it was too far-fetched to have Kazran doing what he was doing (it’s the future and a different planet, so people have different attitudes/morals) Kazran was showing what he represented, as saving those people wouldn’t provide him with any benefits.  And on that theme, we could see how having Abigail ‘taken away’ from him had such an adverse affect – he couldn’t have her, so why should he do anything for others if it meant him still being unhappy?

It’s good to see Matt Smith at the forefront of this episode, as we continue to learn about his Doctor.  He has this knack of wanting to make people realise their worth – he did it previously with Sophie (in The Lodger) and Rory (in The Big Bang) and his attempts in this episode are all made to make Kazran realise, that by not slapping the boy, he isn’t like his father no matter how much he thinks that.  But as we learn, The Doctor going back didn’t do anything and in fact, was actually the cause of Kazran’s personality, thanks to them taking Abigail on all those adventures, and not realising the affect it had on her.  Throughout the episode we get to see how the young Kazran becomes enamoured with his adventures with The Doctor, even seeing him wearing a bow tie, like his new best friend.  But when he discovers Abigail’s predicament, he quickly loses faith and the way he snatches at his bow tie and removes it, symbolises the fact that he’s lost faith in The Doctor and more-or-less blames him for putting him in this situation. It’s a beautiful piece of television that shows his feelings, in one second of action that would normally amount to 20 lines of script!

Another beautiful set-piece, was the scenes where the older Kazran was watching his life unfold on the telly, just like we were!  Things like this make us viewers connect more with the story and feel involved, as one of the characters is in the exactly same position as us.  As mentioned, I thought the ‘homage’ to A Christmas Carol was done well – having Amy as a hologram left me feeling she was actually a ghost.  And if Kazran didn’t save them – they all WOULD be ghosts when the ship crashed!  Kazran’s resulting line of ‘Everyone has to die’ is very ironic, considering he was keeping Abigail alive by not letting her out of her box.  Even though she was cast for her singing ability, I thought Katherine Jenkins did very well in her first acting role and it’d be interesting to see if she’ll appear in anything else.  I thought not having a redemption for Abigail was a welcome change, as we normally have a sort-of magical solution to these things.

One constant I hear about this episode is that ‘it looks good’ and it bloody does!  It’s the debut story for new production designer Michael Pickwood (who is the son of William Mervyn, who appeared in the 1966 story The War Machines as Charles Summer) and Pickwood does a great job with this planet, possibly very early in its history, due to the Victorian-style materials dotted around the place.  As we start the next series, it should be interesting to keep an eye on the sets to see the difference another pair of eyes makes.  With Doctor Who in HD these days, skimping on the cost of sets isn’t really an option any more!

The story is very much entrenched in double-meaning, as I’ve established, but it does have its silly moments (being a Christmas special!)  I didn’t mind the flying fish so much (it’s an alien planet – what do you expect?) but taming by song and then using the shark to pull them along the sky, was perhaps a little bit far-fetched.  But to be brutally honest, if that’s the biggest complaint about the episode, then you know you’ve seen something good.  Then again, is having a flying shark more jarring than the entire population of the world turning into The Master?

No, I don’t think it is either!

What We Think Now: Actually, it’s a lot better than we thought it was!

If you would like to contribute a 5-word review for The Impossible Astronaut/Day of The Moon  please @ us on Twitter, using the hashtag #12jammiedodgers, or post on our Facebook Page!
arthur darvil charles dickens christmas christmas carol doctor who dr who karen gillan katherine jenkins matt smith michael gambon sci-fi