The Matt Smith Review: Part 5 - The Vampires of Venice 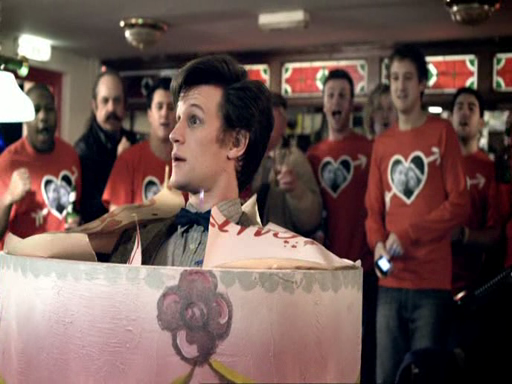 What We First Thought:  I would drag up to attend that school

Seeing as how we like to ‘buck the trend’ here at Fish Fingers and Custard, we’re going to plough that lonely furrow once more, by saying that we really enjoyed The Vampires of Venice.  Okay, it’s no masterpiece, but the disdain in which it’s held by fans is very undeserved. In our opinion, you understand. Don’t come here with a pitchfork demanding executions. Being the persuasive media tool that we are, we will attempt to convert all 4 of our readers into 'thinking again', like we do with these reviews!

Okay, I may be exaggerating the strength of dislike for this episode (for dramatic effect), but according to those Wags at the Internet Movie Database - this episode was a 7.1 out of 10, Time of Angels was a 8.5 out of 10, whereas Journey’s End is an 8.7 out of 10. I’m not saying that Vampires is the better episode, I’m simply saying that Journey’s End isn’t worth 8.7.  You see how fans minds work?  No amount of my exaggeration can ever surpass users of a website that rank Journey’s End above Time of Angels!  It’s just not that particular website though, I look around on forums, Twitter and Facebook and it seems that most fans look for a sweeping generalisation of something and collectively tear it apart like the mythical pink and blue-striped Tiger (Snappy) I mentioned in a previous review.  Not just that, but they don’t actually seem to be studying it properly and if they do, they’ve got their Rose-Tennant-tinted glasses on.  This episode seems to suffer from that a lot.  It isn’t the greatest episode of Doctor Who, ever. But it never claimed to be.  Things that claim to be the ‘biggest and best episode EVER’ are normally crushing disappointments. Just like Journey’s End crushed the spirit that was so well built up during The Stolen Earth…of course this is just my opinion, but I’d like to think I’ve come to it after hearing what others have had say, not to mention watching the episode.

No, Vampires of Venice is just a decent, solid episode that provides us with many layers to get stuck into.  We get a resolution to the cliffhanger left at the end of the last episode. We get more information about this crack that was confronted last time out. And the opening scene was as funny as Doctor Who gets!  I mean, who can look at that scene when The Doctor pokes his head out of that cake and looks gormlessly around, and not laugh?  You can see it in his eyes that he’s panicking, thinking he’s got the wrong place, again!  And who else but The Doctor, would take the time in getting to know the female Entertainer in such a way, that he’ll know that she was a diabetic?

Of course, this was the perfect tonic to last week’s ending (which again, was totally overblown by fans, but I’ve gone on about them too much already!) as Rory joined Amy for an adventure in Venice.  Doubling-up was Trogir, in Croatia, and you have to say that the scenery looked excellent.  The Venetians actually colonised Trogir at one point, which is why the scenery looks like Venice!  I’ve already said in a previous review how different the colour of the episodes seems to be and the new palette helps the look of this episode very much.  But of course all of those elements slip under the radar of people like Mr ‘Mastermind 1993’ Gavin Fuller, who, whilst writing for the Telegraph, first complaint is about CGI.  Since when has Doctor Who ever relied on frigging SFX in its story-telling? Surely Mr Super Fan would know that? Whoops, there I go again!

Just for Gavin’s benefit (I’ve started, so I’ll finish) here are some genuine positives to take from this story (and this is from someone with 10 GCSE’s and scorer of 1 goal in an international football tournament in Belgium. Against a team from Birmingham) First, there’s comedy - as far as I’m concerned, anyone whose face didn’t crack into the faintest of smiles at the cake scene or the exchanges between Rory and The Doctor (You kissed her back? No, I kissed her mouth) or The Doctor pulling out a ultraviolet lamp (and Rory complaining 'yours is bigger than mine') or even a 15th Century Venetian man wearing a stag party t-shirt, needs to be sent to Siberia and made to watch videos of Ade Edmondson’s Teenage Kicks (on a loop, as there was only 1 series. Thankfully) Secondly, we have some actual meaningful lines, amongst the comedy.  Rory’s rant at The Doctor was so well done and very true.  How many times has The Doctor, arrogantly, put his companions into danger, without even thinking? This was something that was touched on during the aforementioned Journey’s End, but never really went anywhere afterwards.  Vampires of Venice also provided us with the sacrifice of a man who had just lost his daughter, his world (as he describes her at the start of the episode) so he has nothing left to live for.  Then we have the Space Fish who travelled through a crack in time to save themselves.  True, their dilemma could have been played out a bit better, and that should be the main criticism of this episode.  Thirdly – the acting. As mentioned about the line from Rory about The Doctor and his dangers, you can see in Matt Smith’s face how much that hit home - you can see the penny drop as he realises. Then there’s Rory, who gets a full run-out in this episode.  His reactions are just superb – from comedy to anger and back again in the space of seconds.  This is how you judge an episode. Not with ropey CGI, which happens to be the best that the BBC can afford. Because yes of course, they do it on purpose.

Having an episode like this, following the scares of Flesh and Stone, is perfect to provide a bit of light relief.  The Vampire girls weren’t meant to be scary, they were clearly meant to be enjoyed by the Lads and Dads.  And maybe some Women too. And I’ve not even mentioned the nice touch of The Doctor producing his original incarnation’s library card (no doubt he has some well-overdue books!)  And I must mention one thing that got me the first time watching it – at the end when The Doctor switches the generator off.  The amount of people moaning over that, expecting some kind of complicated resolution.  It’s a generator, it can be turned off by a simple switch (after you deactivate all the connections to it and abide by Health and Safety guidelines, obviously). What did you expect? Not everything in life needs to complicated. Even for The Doctor!

Overall, The Vampires of Venice is just a solid episode that ticks all the boxes and at the same time – develops the characters further. What else do you want in a Doctor Who episode?

What We Think Now: If this honest review doesn't get us any angry letters, nothing will.


If you would like to contribute a 5-word review for Amy's Choice please @ us on Twitter, using the hashtag #ponytailsarecool, or post on our Facebook Page!
arthur darvil bbc doctor who dr who karen gillan matt smith sci-fi steven moffat toby whithouse vampires of venice william hartnell