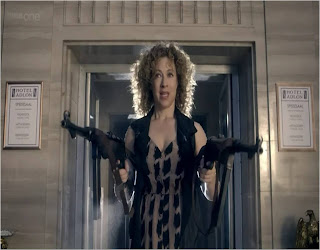 What We First Thought: I don’t know what’s going on, but I’m loving it!

I don’t really know how to review these episodes.  For a start, is really a two parter? It says it is, but it doesn’t feel like it is. It’s clear some time has passed since the events in the last episode, so it doesn’t really feel like a continuation. But it IS a continuation. Oh my head, I’ve confused myself now!

I love A Good Man Goes To War.  I’ve been moaning for years for Doctor Who to have a proper adventure story, instead of the arc-heavy, character development, emotional mush we usually get.  Amazingly though, this episode achieved ALL of that AND a presented a great adventure tale, so it made me happy!  I liked seeing The Doctor recruit some of his ‘friends’ to rescue Amy.  The scenes which saw him pick them up were the highlights of the episode for me, with Strax the Sontaran being the standout in those.  It’s really funny to see how much effort they made to present a scene like that, which probably cost quite a bit, and it only being on for barely 2 minutes! It’s touches like that, that make me realise how much effort is being put into this, and into the storytelling.  Another thing I liked about those pick-up scenes, was when Dorium was protesting and you can see the silhouette of The Doctor on the wall. It’s a beautiful piece of direction and the fact that The Doctor isn’t in the episode for 18 minutes, just shows how good the episode is in terms of keeping people watching and enjoying it.

The idea of The Doctor being a word for ‘great warrior’ is very intriguing, I don’t feel a lot is made of The Doctor’s impact on people/planets/societies and this is an example of what could happen.  I don’t like how The Doctor can just zip around the universe without a care, which has been going on she the return of the show in 2005, so it’s great to see it addressed properly here.  The military going back to the church was a nice touch, as well as The Headless Monks, who were a throw-away name in Time of Angels, but here they are presented in their full glory.

There are episodes that are slow and drag a bit, but there’s no way anyone could accuse A Good Man Goes To War of that.  The pace ramps up when The Doctor finally appears on screen and doesn’t stop until the very end.  In all that, we have jokes, clever lines, great plot points (I particularly enjoyed Rory’s rapport with Strax, and them both being nurses) and we even have some enjoyable action!  When all those things are going on, I can write a lot of things off, but to be honest – there wasn’t really anything to write off.  With a Steven Moffat script, you don’t really get anything that can’t be explained on screen.  Sometimes you need to look carefully, but everything is there for you.  Now with the revelation of River being Melody Pond, how on earth will they explain this? Roll on Let’s Kill Hitler…

If A Good Man Goes To War was a fast-paced ride (but in a classy car, not in those chavvy vehicles that Boy Racers ride around in) then Let’s Kill Hitler on the other hand, starts off slowly as we finally get some answers about River.  What I find remarkable about it though, after watching it again, is that it doesn’t really feel like it drags at any point.  Like it’s predecessor, this episode is directed beautifully – I particularly noticed the scene in which Melody/River is standing on the windowsill, being all evil, and you can see The Doctor in the background flexing his hands in pain.  It’s just a little background shot, but as Melody is talking about what she’s doing, you can see the onset of her attack on The Doctor, behind her.

Later on whilst The Doctor is dying, you can see the determination in his face as he tries to scramble to his feet, in order to help his friends.  And again, in the background, you can see Melody slowing starting to turn, she can see what The Doctor is all about and she even asks him ‘why’ he’s bothering to do what he’s doing.  It’s like someone has switched a light on and she can see through the darkness that’s been inserted in her mind by those naughty vagabonds who kidnapped her.  It’s very subtle, but very well done.

Away from some of the most notable scenes (I forgot to mention ‘Take of your clothes!’ which still makes me laugh!) At the time, I was a bit iffy over the Teselecta, but after knowing what is coming, I understood the idea of them more.  The whole ‘people made miniature so they could fit inside a shape-shifting robot, to dish out justice’ just caught me cold and it’s maybe something that should have been introduced more subtly.  But then again, how on earth could you do that in an episode that had to cram in as much as this?  And they did cram a lot in, but they made it look effortless and, more importantly, make sense!

(And I am including the Teselecta in that!)

What We Think Now: A Good Man Goes To War and Let’s Kill Hitler bookmark each other perfectly.  Now for the rest of the answers!

If you would like to contribute a 5-word review for Night Terrors  please @ us on Twitter, using the hashtag #scarytoys, or post on our Facebook Page!
alex kingston arthur darvil bbc doctor who dr who karen gillan matt smith reviews sci-fi sontarans steven moffat uk