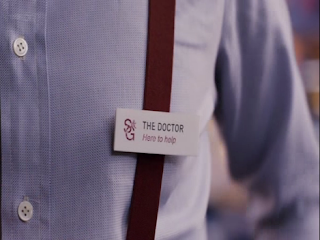 What We First Thought: I love this just for the dig at Britain’s Got Talent. Fantastic!

You know what? I’d never thought I’ll be using the words ‘I quite fancy another helping of James Corden’ whilst doing these reviews.  I’m fiercely opposed to watching him in anything else, but the domestic life which has been fit around his character, Craig Owens, is like a nice pair of slippers – comfy to slip into from time-to-time.

I like how Gareth Roberts mirrors The Lodger, what with Craig repeating himself out loud when he opens the door to The Doctor and Sophie forgetting her keys, again! Even The Doctor gets in on the act, resurrecting the ‘baby talk’ gag that was first seen in A Good Man Goes To War.  And I do think it’s a gag on The Doctor’s part, some online fans do seem to get their knickers in a twist over the slightest thing these days!  They’re the exact type of people that would be ssshed by The Doctor’s sssshing!  Sometimes it’s nice to have these little things (or as they say in Colchester – ‘tings’) return, as it puts you further into those comfy slippers I mentioned. Maybe they have a 3-D dog’s face or a dinosaur on them, or something?

Stormageddon was undoubtedly the star of this episode, with Matt a close second due in no small part to that scene the pair of them had in the bedroom. Could you imagine any other Doctor doing that? Hartnell would be all ‘Quiet Boy!’ Pertwee would be toping up his bottle with wine to keep him quiet. Tennant would probably be crying, like he always does. Anyway, you can clearly see why Matt is the perfect choice to play this role, all of his qualities are there to see – his compassion and kindness are delivered by someone who looks so young, so human, but never at any point did I think that.  Just by that scene alone, you can see how alien and how old and tired The Doctor is, and it weaves in beautifully with the overall story of the series.

Then there’s Craig, the nervous Dad who eventually proves himself (to himself) throughout this adventure.  There’s some nice nods to this aspect of the story and I really enjoyed how it was played out. Maybe that was something that The Doctor picked up on and did the baby talk as a way of influencing Craig? Or maybe I’m reading far too much into it and he can actually speak baby. Which would give those keyboard chimps the hand grenades they require.

This is a Cyberman story of course and I feel that this episode just sums up the modern-day Cybermen – just there to be beaten without any fuss.  To be fair though – for one moment I thought Craig was a goner, so credit to all involved for making that scene what it was!  Again, people have been moaning about Craig ‘blowing them up with love’ (that’s a classic Gareth Roberts innuendo right there!) but I actually bought into this, I mean what wouldn’t you do for your own, crying child? I think it’s ridiculous for people to bang on about this when you’ve got that reason AND an attempted explanation from The Doctor!

It was great to see Lynda Baron back for her third spell in Doctor Who, playing the role of Val, who is like any ‘lady of a certain age’ I know. That actually feels wrong to describe Lynda Baron, but I’m sure you know what I mean!  Then there’s the cameo by Amy and Rory, with Amy being a top model it seems.  I really didn’t know how to feel about this development at first, then I saw Rory lumping around all the bags and smiled. All angst forgotten!  I would mention the final scenes in this, but it’s something which would be best covered in the next review! No doubt the idea of it, to build up excitement for the final episode, still works a year later!

Overall, Closing Time is very much an enjoyable episode with some nice dramatic touches, peppered with some funny lines and acting from all involved. Now can we have Corden back please? If only to keep him away from presenting tings!

What We Think Now: I wouldn’t last two minutes in Essex.

If you would like to contribute a 5-word review for The Wedding of River Song  please @ us on Twitter, using the hashtag #eyepatcharmy, or post on our Facebook Page!
arthur darvil bbc doctor who dr who gareth roberts james corden karen gillan matt smith sci-fi uk