The Matt Smith Review: Part 18 - The Girl Who Waited 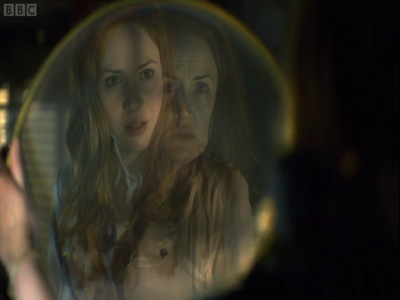 One aspect I wanted to explore whilst watching all these episodes again was ‘would I like them after enough time has passed'.  I generally watch an episode twice – once live and again later in the week.  If I REALLY enjoy the episode, I might watch it again. But then I leave it, perhaps for a couple of years or so.  I just don’t see the benefit of watching an episode 5 times in a short space of time, because in life you may be in a certain mood at the time or in a certain situation which may affect your enjoyment of a particular episode.  I didn’t really think The Girl Who Waited was brilliant, but now I think it’s easily one of the better episodes of the series.

The Amy/Rory relationship actually makes sense in this episode.  It’s such a simple (or perhaps, not so simple) idea to have the dilemma of 'which Amy' to choose, but it works brilliantly as it opens up that window for us, to let us have a cheeky peep into the minds of these fictional characters.  The older version is obviously bitter at what has happened – a couple of minutes for us, but nearly 40 years for her.  Yet there she is in the invisible background – the younger Amy, still running around, trying to find a way out.  The answer to the dilemma may sound simple (pick the young one!) but after the performance from Karen Gillan as the older Amy, you couldn’t help but understand why she wanted out of this place – for her, she has already been through all of this before, so the young Amy has to do it too.

If you push me to say, I’d tell you that this will be Karen’s best performance in Doctor Who.  I don’t really know how she can top playing two roles, two different ages (but yet the same character!) as well as she did.  I believed in the ridiculous situation which the two Amy’s found themselves in, due to Karen's (and of course, to the ever-brilliant Arthur Darvil) acting abilities.  True, you could have seen it coming that old Amy was going to be left behind (what a threesome that would have been!) but the way in which their ‘goodbye’ was handled, was pitched just right to make the more emotional viewers shed a tear or two.

Credit must go to Tom MacRae, who felt the wrath after his much-re-written script for Rise of The Cybermen/The Age of Steel was panned by most fans I know.  I now understand that it wasn’t him who destroyed the legacy of the Cybermen (we all know that’s RTD’s fault!)  It just goes to show why a writer should be given more than one opportunity to write for Doctor Who.

I’m a big fan of the direction and this beautifully-shot episode can be summed up by one scene – as Rory looks through the glass and sees the images of old Amy and young Amy, almost stood in the same place.  It’s a shot that throws up many thoughts in just a second or two, as older Amy hangs there, just in shot, looking like a ghost – a ghost of young Amy’s future.  The look of the episode was also well done I thought – the robots, the scenery and nothing says ‘future’ than white walls everywhere!  Overall, The Girl Who Waited was about as perfect as you can get a Doctor Who episode these days, so well done to all involved!

And before any art lovers mona (get it?) about it – there are SEVEN Mona Lisa’s, so don’t panic!

What We Think Now: Brilliant

If you would like to contribute a 5-word review for The God Complex  please @ us on Twitter, using the hashtag #hornybeasts, or post on our Facebook Page!
arthur darvil bbc doctor who dr who karen gillan matt smith sci-fi tom macrae uk