The Matt Smith Review: Part 2 - The Beast Below 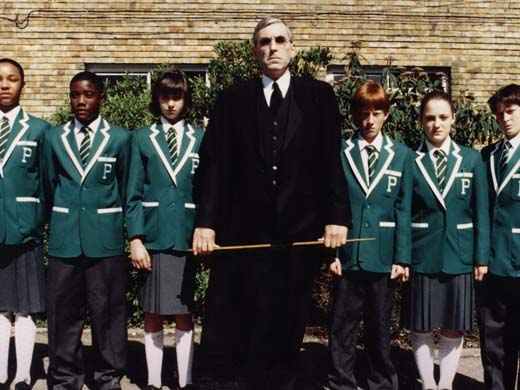 What We First Thought: It’s alright…

It’s 1996. One of the best years in my young life. England are hosting Euro 96 (where we beat Scotland, Holland and then Spain on penalties. Then my little heart was broken by a German man, as Andreas Moller scored the winning penalty in a shoot-out in the Semi-Final. Bastard), it’s also the height of Britpop, the summer was hot, and there’s some excellent children’s programming. Like many kids my age, I loved a programme called The Demon Headmaster.  I suppose you could call it a ‘Children’s Sci-fi Drama’, where a very strange man, posing as a Headmaster, would use children for ‘scientific purposes’.  In later Series’ he would move on to establish a scientific base and continue his experiments and just generally be a pain for the kids who tried to stop him.  You probably couldn’t make anything like this today, in fear of The Daily Mail Brigade getting their knickers in a twist, over a man in his 50’s hypnotising children to do his bidding.  But being 10 years old, the show was genuinely scary - and it must have been decent - it was even nominated for a BAFTA!

That was my childhood. I had no Doctor Who to affect me whilst growing up. It was just this scary grey-haired man who I had nightmares about, not Daleks or god forbid, Quarks.  So imagine my surprise when the actor who played that nightmarish man, Terrence Hardiman, popped up in the second episode of Series 5 of the revived Doctor Who! And yes, I haven’t forgot about The Beast Below, which ironically, is probably forgettable as Doctor Who episodes go!  Don’t get me wrong, it’s alright, but it’s not about to push to the front of my top episodes list.

I found it interesting that this story was set during the 29th Century, after solar flares burnt the earth.  This is an obvious call-back to The Ark In Space and I found it intriguing that there were other plans for people to escape Earth, as I got the impression that the people in the Ark(s) were the only ones who had survived.  Another classic call-back (or rip-off?) was the Star Whale.  Now in my notes for this episode, I kept writing ‘Space Whale’ by accident, as that was the name of a similar creature for a story (‘Song of The Space Whale’) purposed by Pat Mills and John Wagner in 1980.  It’s a very intriguing concept, which was revisited by Big Finish in the shape of ‘The Song of Megaptera’ (possibly changed for obvious clash reasons), released in May 2010. Now I’m not accusing anyone of anything (as if I would!) but this – and many other ‘Lost Stories’ - would have been something very interesting to touch on, in the Confidential or on a DVD Extra.  Not to mention anything at all was a bit disappointing and an opportunity was missed in educating a new fan about the long (and sometimes confusing – if not explained properly) past of Doctor Who.

The story itself was made up out of plenty of decent bits that just didn’t quite fit together.  One element I did love though – was the comparisons with the Space Whale and The Doctor.  At the end, Amy’s speech about ‘What would you do, if you were so old, so wise, so lonely and you saw a child crying?’ just sums up The Doctor (I’m paraphrasing, probably incorrectly, but you get the idea).  The shot of him comforting/trying to steal off the young girl, whilst Amy was thinking he was still in the TARDIS (so was still talking to him!) was fantastic and a moment which you can use to sum up Matt’s Doctor. Or any Doctor, really.  Steven Moffat can see the importance of using children in his stories to appeal to the children watching, which will get them involved in the on-going narrative (just like the makers of Demon Headmaster did 14 years previously, no doubt!)  Although everyone seems to forget that The Star Whale ate adults.  So much for youth development!

My real gripe about The Smilers was that they were built up to be some sort of ‘big monster’ but in reality, were about on the level of Rose Tyler, in terms of scariness.  To be fair though, I did enjoy their role of ‘Policemen’ in this Police State, that The Doctor refers too.  A comment on the modern world, maybe? Though the moral dilemma of Starship UK was a good one, I just felt that it was a little too convenient.  Would parents really allow their children to be put into such danger? (yes I know The Beast doesn’t eat children – but they do seem to be used as slaves by The Demon Headmaster!)

On its first airing, Matt seemed to get a bit of flak for his rant about humans.  I know plenty of humans, and a good proportion are bastards.  Why is it surprising that The Doctor went off on one after he found out they were torturing this beautiful creature?  A creature, may I add, who he identifies with, as mentioned above.  How many times has he been on the wrong end of a nasty human?  You have to say though, that Matt was fantastic once again.  His delivery of line telling Amy about his race being gone, was just beautiful and heartbreaking at the same time.  Under another regime, that plot-point could have dragged on and on, but all it took was one line, and some great acting.

I’ve been prattling on for so long that I’ve not even talked about the other characters yet!  I really enjoyed Liz 10’s performance (played by Sophie Okonedo – who was also companion Alison Cheney in a Doctor Who webcast ‘Scream of The Shalka’, which starred Richard E. Grant as The Doctor).  I thought she really was convincing as the Queen who had to go through the agony at finding out the moral dilemma she created, every 10 years or so. Which is saying a lot, considering she was an all-action, plain-talking (and likeable) descendent of the current Royal Family!

It was nice to see Amy at the heart of the action this time around.  Her quick-thinking at the end saved the day, and quite possibly The Doctor’s sanity!  I think plenty of people go overboard with their criticisms when dissecting the character of Amelia Jessica Pond, but her contribution to this episode definitely goes into her credit bank.  The only real disappointing characterisation, was the lack of screen time for The Demon Headmaster.  Earlier on, what with his natural ability to act really creepy, you could be forgiven in thinking that he was behind the whole thing!  I felt we just needed more of that throughout the episode, which at barely 40 minutes – needed a bit more padding out!  After previously watching Mr Hardiman playing a very camp gentleman in a few episodes of ‘The Worst Week of My Life’, it was a very welcome return to form for my favourite Jack Straw look-a-like and the only man who scared me in 1996, apart from Andreas Moller (he’s still a bastard).

What We Think Now: It’s a bit better than I thought it was.  Although I don’t think those Laughing Clown booths (that they used to have at fairgrounds) have anything to fear from The Smilers.

(Yes, I know that 1996 was the year that Doctor Who: The Movie came out. I just can’t remember it being advertised!)


Your (5 word) reviews of The Beast Below:

@Mr_Brell: “Shame. Such a wasted opportunity”

If you would like to contribute a 5-word review for Victory of The Daleks, please @ us on Twitter, using the hashtag #idaleks, or post on our Facebook Page!
bbc demon headmaster doctor who dr who euro 96 karen gillan matt smith steven moffat terrence hardiman