- June 25, 2012
In the run-up to the new series, we’re going to do a Cher. No, we’re not going to have a facelift that makes us look frightening to young children and animals, we’re going to turn back time and find a way to review every episode of the Matt Smith Era so far. We’re going to re-watch every episode and see if our original reactions to them differ from now.  First up is The Eleventh Hour, which obviously provided the title for this fanzine! 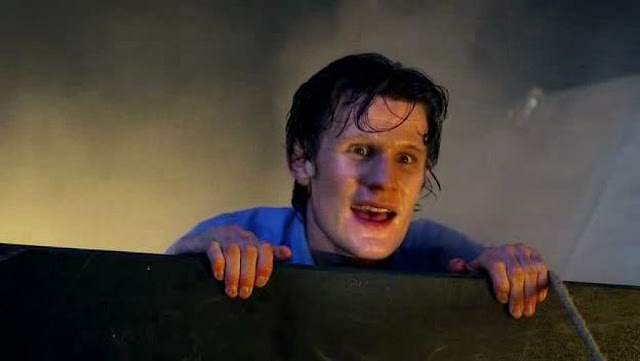 What we first thought: This is the best thing since discovering that the off-licence up the road doesn’t ask you for ID.

I’ll preface this by saying that I gushed like a Teenager at a Justin Bieber concert when I first watched this.  The general ‘even though I’ve never seen him in a episode yet…’ negativity towards Matt Smith from supposed fans, made me want this first episode to succeed so much that they would crawl back into their holes and never hear from their miserable gobs again.  More importantly, it needed to be good to capture the imagination of the fickle viewing public, after the success of the David Tennant Era.  And you know what? I believe they pulled it off in some style - Matt’s triumphant walk through the mournful face of Tennant, left us in no doubt that this man IS The Doctor!  I really love this episode and I’m going to make no apology for this somewhat biased review.

It’s 2010 and the Doctor Who fandom is spilt.  There are those that are so distraught at the departure of David Tennant (and to some extent, RTD) that they weren’t prepared to give Matt Smith and Steven Moffat a chance, in turn not getting what the show is about.  REGENERATION is the key word and like its central character, Doctor Who has always changed and adapted.  Then there were those who were excited (perhaps a bit too excited) about this new era of Doctor Who, that expectations went through the roof  What Steven Moffat had to do, was to start well from his clean slate and establish his Doctor Who quickly.

Moffat is a writer that likes to play with the imaginations of children and watching this episode back has made me realise what a genius piece of writing it is.  From the very first scenes when The Doctor meets Amelia, you can see just by looking at the scene and listening to the words used, that this has been made to engage a child and hook them into the story.  Lines like ‘You know when grown-ups tell you everything is going to be fine and you know that they’re probably lying, to make you feel better’ will just hit home with some kids (and possibly some adults too!)  What’s more poetic is that Amelia and this new Doctor are children.  Many a Keyboard Warrior may get angry at this, but Doctor Who is primarily made for Children.  Yes, it is described as a family drama, but how can a family drama be a family drama with no children watching?  That’s how you get your viewers – parents of kids will watch something if their child is interested in it.  That’s how Doctor Who has worked for nearly 50 years and always will.  Trying to ‘adultise’ Doctor Who simply doesn’t work (see the 1996 TVM).

The story has somewhat become a sideshow, what with me banging on about Doctor Who in general, but after watching this again, I can understand a bit more about Amy’s backstory.  It’s very much in the vein of ‘Boxset Telly’, where TV shows are now made for the commercial market, so are designed to be watched over-and-over again.  I don’t particularly subscribe to the view that you need to watch this episode (or series) over-and-over again to understand it, as everything you need to know is in plain sight.  But I think it adds another dimension to the characters if you go back, knowing what you know.  You can see how much planning has gone into creating these people and their stories.

What more can I say about Matt Smith? He sold me pretty much from his first scenes in the TARDIS in The End of Time.  You can see that child-like enthusiasm in his face when he first meets Amelia, which is probably a major reason in her trusting this strange man.  I got a ‘Doctor Reborn’ mantra from this first episode and everything about it seemed to be starting from afresh.  I’m not talking about the theme or the titles, but the actual direction and lighting of the episode.  I remember watching it for the first time and the picture just seemed so different.  The bright colours of the RTD were gone, with little Amelia all alone in her scary house - and the picture just made the house look cold.  There are many ways which you can scare people without any lines or action being played out, and this is one of them.

As mentioned above, some of the lines in this episode are pure gold.  Another one I particularly enjoyed was the ‘Am I People?’ comment from The Doctor to Amelia, just before he left her.  Here’s a girl that has been let down throughout her short life by people and here comes a strange man who she thinks the world of, barely an hour after meeting. The acting is superb too – that resulting smile from Amelia and the look of hope and happiness in her eyes when The Doctor is about to jump back in the TARDIS...then he had to spoil it all by turning up years late!  Despite being a bit upsetting, it’s still one of favourite scenes – she’s sat there on her suitcase with a massive smile on her face and we know that he’s not coming back.

The rest of the story was an absolute breeze, as an hour and a bit passed extremely quickly.  The major compliants I hear about this episode are for the SFX.  I think the usage of people being Prisoner Zero (or 0, if you prefer) helped our imaginations - instead of having the actual creature, made up out of ropey-CGI, roaming around all the time! Yet another thing I thought was pure genius – was the fact that The Doctor and Amy already had a history before they met.  It’s something that’s never been done before, and I think Doctor Who should always strive to try something different.  Here we have a girl whose life has been affected by a strange man, who (in his timeline) met her as a little girl about 10 minutes ago.  That plotline just opens up so many possibilities and at the same time – saves time in inserting any tedious scenes for the companion to ‘familiarise’ themselves with The Doctor, and thus mucking up the pace of the story.  I’ve commented in the past that Moffat isn’t a writer who writes meaningless lines, he finds uses for everything and is able to move a story along at pace. I feel that The Eleventh Hour just proves that assumption.

How this will work out for the rest of the series? Well let’s find out!

What we think now: The Eleventh Hour was a crucial point in modern Doctor Who history, if they got it wrong it could have been disastrous for the show.  But they got it so right and in turn, adopted a back-to-basics approach which in itself, provides a solid base to build from for the future.

We also put the word out on Facebook and Twitter, asking for 5-word reviews of this episode. Just to be awkward.

@backtoblack5: “perfect from start to finish”