The Randomiser - 50 Years of Doctor Who Stories - Part 4

- November 21, 2013
Today’s Randomiser sees us do things a little bit different. But don’t fret – both of these stories are CANON. Remember that.
Time and The Rani 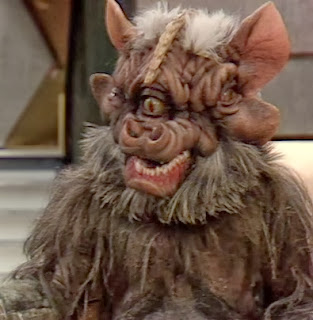 The one story that you don’t want to pull out of your 10 year-old Quality Street lid, and it’s probably this  Time and The Rani.  It makes Terror of The Vervoids look like an episode of Poriot.
.
I don’t like bitching about episodes, as plenty of people worked very hard just to bring these to our screens, but after watching this, I wondered why they bothered.

It’s 1987 and Colin Baker had been sacked. Not by the producer or anyone who had anything to do with the making of the show, but the head of Programming at the BBC.  Not just that – but the budget continued to be whittled away by the powers-that-be.  Whilst watching this, I kept wondering; Why did they set this on a alien planet, when they had a miniscule budget to play with? Why couldn’t they have done what they did in 1970 and bind The Doctor to earth? That way – they save money on sets and what’s more, the scenery is actually real.  The situation with Colin (quite rightly) refusing to come back to film a regeneration scene couldn’t have been avoided, but wouldn’t it have been more believable if the TARDIS crash-landed on Earth, with The Doctor trying to fix things in the console room? Mel could have toddled off to a new Zero Room or something, which would explain why she was unscathed.  Instead we got a ridiculous story, with The Rani shooting down the TARDIS and dressing up to fool the regenerated Doctor. No wonder he didn’t know what was going on, I didn’t either.  What’s more, after the pretty decent Mark of The Rani, this story pushed the character down that slippery slope of being held up as a ‘joke’ and that just got worse with Dimensions In Time. Normally, I don't mind 'bad' stories, as long as I see something in it that captures my imagination or makes me laugh. This didn't do any of those things.

The story revolves around The Rani (Kate O’Mara) and her stealing some of the universes greatest geniuses (and The Doctor) to contribute to a ‘Time Brain’ that will turn the planet into a ‘time manipulator’ that will give her control of time across the universe. Or something.

For a start - the story isn’t worthy of four parts.  Nothing really happens in the first two parts to advance The Rani’s plan – she just dresses up as Mel and gets The (newly-regenerated) Doctor to fix one of her machines.  I have trouble with this, as it’s been well established that The Doctor isn’t exactly a standout ‘genius’ within his own race, The Master and The Rani have demonstrated more ability. Meanwhile, Mel just pisses around on the surface of the planet, that looks like nothing but a quarry, screaming her head off.  Some of the acting is quite painful. Sylvester is so off the pace here, regeneration or not.  To be fair, I don’t think the actors were particularly helped by the direction.

Apart from The Rani, the other ‘villains’ of the story were the Tetraps.  These monsters look like something that was rejected from Tom Baker’s era for being too rubbish. I could have sworn that one of the Lakertyans was trying his best not to piss himself laughing when he was being talked at by a Tetrap. Just sums the story up for me.

Like I’ve previously said with these reviews, I would never recommend not to watch any Doctor Who story, all I’ll say is that Time and The Rani is a real education.  It’s a lesson on how not to do Doctor Who, especially at a time when the knives were out for this ‘rubbish and outdated’ programme, it’s extremely sad to see what was produced. 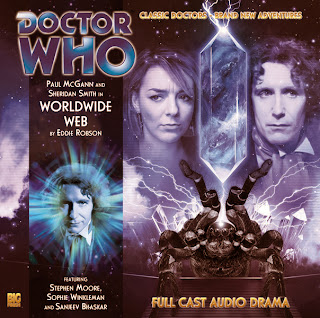 With The Night of The Doctor establishing the Eighth Doctor’s audios as CANON, this would be a great opportunity to mix things up and put them into the draw along with McGann’s two on-screen stories. The odds were always in favour of me picking an audio and low and behold, the Series 3 ‘finale’ two-parter was the chosen one (or 'The Great One' if you will). It's fortunate in a way, because this story brings back a classic monster race from Jon Pertwee’s final story – The Eight Legs!

The Doctor and Lucie are in London, investigating a space probe and a strange cult that seems to have come from nowhere to become a major religion, professing the end of the world.  Are they being truthful? You'd better watch your backs…

This story is an interesting listen, but I don’t particularly think that this is the strongest Eighth Doctor story in terms of advancing the main characters. It starts off great, but once the Eight Legs come to fore, I feel that the action aspect slightly tails off as it delves into ‘sciencey territory’ which, if you're not fully concentrating on, might be a bit confusing, so you’ll need to listen carefully to it.  Otherwise, it’s a clever story and fits in seamlessly with what we learned about The Eight Legs in Planet of The Spiders.  The title of the opening part ‘The Eight Truths’ relates to a Buddhist believe system ‘The Four Noble Truths and The Eightfold Path’ and I felt that the story captured the sense of (what some people) would call ‘a cult’.  Of course, this fictional ‘cult’ has been designed for a motive not relating to peace and harmony - but you’ll need to listen to find out what it is!

The story is crammed with more guest stars than a Stellar Manipulator. Stephen Moore, Sophie Winkleman and Sanjeev Bhaskar play the main supporting cast and there's also a couple of characters from previous stories in the audio range. This story isn't any different though, as all the episodes contain a big name or two amongst the cast. The quality of the casting just shows how much of a pull Doctor Who is and a quality name, by definition, adds that little bit of extra quality to the story and makes it more of an enjoyable experience.

I wouldn’t recommend that you listen to this right away, as I've mentioned above, it contains a couple of characters exclusively from the Eighth Doctor audio range.  If you’re new to these stories, start from Series 1 (Blood of The Daleks) which introduces Lucie and go from there.  The majority of the stories are a great listen and really do bridge that gap between ‘classic’ and ‘new’ Doctor Who.  Sheridan Smith is great and likeable as Lucie and McGann is always fun to listen too. Maybe it'll work well in a Spiders Double (or 'Treble', if you're being pedantic, Bill.

You can check out them at www.bigfinish.com

Tomorrow is our last day as we cover the Doctors from the ‘new era’ of Doctor Who!
7th doctor 8th doctor bbc big finish doctor who dr who kate o'mara paul mcgann sci-fi sheridan smith sylvester mccoy the rani uk