Thanks Matt - and Goodbye! 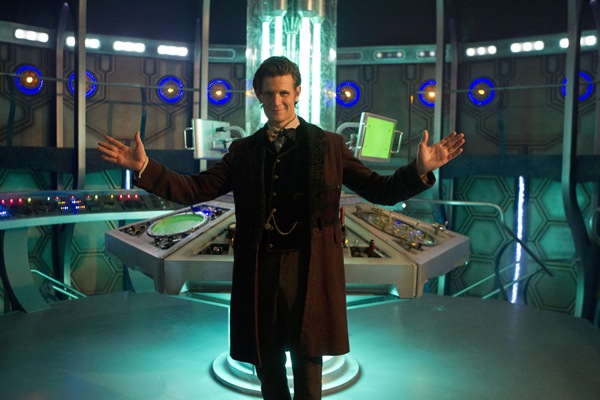 I don’t think the word ‘shock’ is the right word to use to describe Matt Smith’s exit as The Doctor - we’ve been hearing rumours for the past year or so, maybe ‘surprise’ is the best way to describe it.  At first I felt a bit sad, I must admit, but that was quickly forgotten in favour of gratitude to a young actor who gave his all in what is, the most demanding acting role in television.

We’ll always have a soft spot for Matt here at the fanzine - in those early days, way, way back in 2010, he was The Doctor who was up against a tidal wave of disgraceful abuse from some fans, whom tended to judge him on looks, videos of filming and the fact that he wasn’t David Tennant. BEFORE they even saw one of his episodes.  So naturally we (well most fans really, we won’t take credit that we don’t deserve) rallied behind him and the series, as it was those run of episodes that made us fall in love with Doctor Who all over again and start this mag.  And you know what? He didn’t turn out to be half-bad did he? Some moments of silly wackiness (which didn’t feel forced) were bookended by moments of subtle feelings. Not many tears, no big speeches, just an understated performance that left us in knots of emotions. I do hope that he bows out in the same way! With him being the 3rd of the ‘modern-era Doctors’ – I do hope his exit is similar to John Pertwee’s, for me, due to the words mentioned above, the best regeneration scene there’s been.


To be fair to Matt (though, it was obviously all our doing) what I like about this announcement is that he’s leaving us wanting more, he isn’t outstaying his welcome, leaving a show that became too self-indulgent with it’s current format (which is ironic, seeing as it’s the 50th year and being self-indulgent is very much the game!)  I really enjoyed David Tennant’s performances and I know that RTD is a fantastic writer and producer, but by the end it seemed that Doctor Who was getting tired, as they ran the same race over and over again, but with bigger stakes at the end of each one, with the finish not living up to the start. A change was overdue and when Matt popped out of the TARDIS to say hello to little Amelia, we knew that we were in safe hands – Doctor Who had regenerated.

What I enjoyed about Matt’s time as The Doctor was the sense that he was totally unflappable and seemed to take the weight of the show in his stride. It’s no mean feat for an actor who had only first appeared on television 4 years previously.  He’s very much a student of film and I reckon these people are the best to have as actors, as they go through a script with an understanding of how a scene technically works and how it can be done better.  It might just get an extra 5% of performance out of him – and there’s no denying that, not just the sheer effort, but the quality of Matt’s performance as The Doctor was great.  Just watch Time of Angels/Flesh and Stone for evidence of that – it was the first thing he ever filmed on Doctor Who and for some people – it’s his best episode!

Thoughts turn to the next Doctor and all the usual names are being mentioned.  I’ve no idea who it should be and by now, we should have learnt that it’ll be someone without a massive profile.  I’ll prefer an older gentleman (The Doctor is a man, just like River Song and Romana are females – just my personal view) I think at this point in the show’s narrative we need someone with bags of experience so they can take Doctor Who in a different direction, a new direction.  I’m not really a fan of The Doctor being a radical change from the previous one, just a subtle change.  I think casting someone older will mean that it’s likely that he’ll stay in the role for a long period of time, they’ll see it as more of a career-defining piece, whereas a younger actor sees it as a role to build up experience and as soon as it’s collected, they go off and do something else.  I’ve no problem with that – Peter Davison did that, but I wouldn’t like it to happen every time. Making Doctor Who a finishing school for actors can only undermine the role of The Doctor and what it means it to be one.

With it being the 50th anniversary (although with Who fans being Who fans – we’re bickering about that too. Do you celebrate a 50th year before or after it’s birthday?) everything is getting incredibly exciting and this news should add to that. It’s isn’t a time to be sad, there are more important things to be sad about, it’s a time to say thanks and to look forward to the future. Doctor Who has never been in better shape and a new Doctor will only ramp up interest even more. The show is regenerating again and maybe it’ll give the current writing team another kick to try something different. Change. It’s what Doctor Who is about.

Thanks Matt, good luck in the future. Or the past.

If you would like to add your thoughts on the Matt Smith era (positive or negative – we don’t discriminate) to be published in the next issue of the fanzine, please e-mail us at fishcustardfanzine@googlemail.com
bbc david tennant doctor who dr who jon pertwee leaving matt smith sci-fi steven moffat uk