A Nice Warm Welcome To Jenna-Louise... 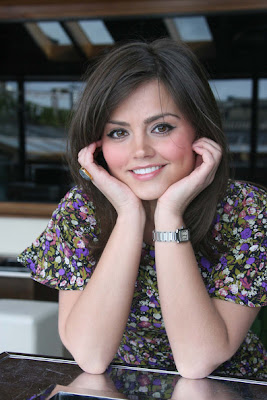 ..or Jenna, as the lazy people amongst us will be calling her. Maybe that's what everyone calls her, who knows. Anyway, today has seen the BBC officially announce that Jenna-Louise Coleman (that's how a double-barrel forename SHOULD be written, Sarah Jane fans!) will be taking over the bedroom (and knicker drawer) of Karen Gillan. Oh and Arthur too, but the press always seem to forget about him!

Personally, I think this is a good move. Jenna isn't that much of an unknown quantity, due to roles in Emmerdale and the AWARD WINNING Waterloo Road, so at least we know that we're getting someone decent. I think it's fair to say that she's more of an experienced actress than Karen, Freema or Billie were at this point in their careers. If she nailed her audition as well as we hear, then don't worry - she'll be good and hopefully, a nice change!

Even more personally, I wanted to have a different sort of companion this time around. I'm sure other people are getting sick of the 'attractive, young female' route that Doctor Who seems to go down. It's a sad reflection of society when a television program needs to these people to appeal to an audience. I find it wholly ironic that one of the best companions done on Big Finish audio, is a 50 year-old woman. See, it works! But lets face it, we're never going to get a character so old, so wise, so able to stand up The Doctor. Doing something different should be the hallmark of Doctor Who, but sadly, it isn't any more.

But whatever happens, I do hope Jenna won't be a run-of-the-mill modern day girl, or using wishful thinking, not even human!

I just hope she has braced herself for life in Doctor Who. Welcome to the madness.
arthur darvil bbc companion doctor who dr who jenna louise coleman karen gillan series 7 steven moffat uk