The Scarifyers: The Magic Circle - Reviewed 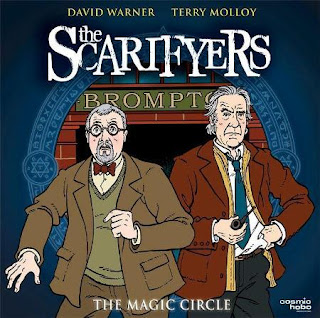 It was with mixed emotions when I heard that The Scarifyers would return, following the death of Nicholas Courtney. Delighted that the series would continue of course, but equally sad that Nick wouldn’t be a part of it. How on earth could they make the story work? I wondered. Well I needn’t have worried, as The Magic Circle has, quite easily, become my favourite Scarifyers adventure!
David Warner (who is no stranger to working on audio with various Doctor Who spin-offs) stars as new character, Ex-Police Sergeant Harry Crow, who is enlisted by Dunning (Terry Molloy) to help him search out Lionheart (Courtney), who seems to have gone missing whilst looking at an old police case. But as the pair are trying to get to the bottom of it all, someone (or something!) is attacking certain magicians…
The story, as always, mixes comedy and drama superbly, but with this being more of a poignant story, I thought it was taken to another level. The performances are all top notch, but Terry Molloy is something else. Although I suspect that he wasn’t acting that much, considering the circumstances. I was very impressed with how the writers handled Lionheart’s backstory and provided a very fitting finale to his character.
Warner offers up a very different character than his predecessor, but he has that same quality in his voice that makes you want to listen. Whilst listening to the story, you can slowly see (or hear!) his character developing and I’m already looking forward to hearing more!

One of the other reasons why this particular story is my favourite, is because of the music. I’ve never really noticed it before (apart from the excellent theme) and some people say that you shouldn’t notice good music in drama, on whichever media. But I disagree, you should notice the best music, especially on audio, as it brings the best out of a particular scene and affects your emotions, and the way Edwin Skyes’ music is placed in some scenes, just adds that little bit of quality to an already-excellent release.

Also included is a 20-minute documentary ‘Remembering Nick’ where the cast and crew of The Scarifyers share their memories of Nick’s time on the series. Some genuinely heartfelt words, just confirming about what we as fans, thought about the man. And what’s more – the series was originally written with Nick/The Brig in mind!

I can’t stress enough that you should go out there and get yourself a copy. The Scarifyers is just quality and deserves a much wider audience. Even if you haven’t listened to a Scarifyers story before, you should still enjoy this for what it is. A tribute to Nicholas Courtney.

The Scarifyers: The Magic Circle will be available from http://www.cosmichobo.com/ on CD and download from the 1st November